“Latest News and Updates. Thank You for Over 6,000 Hits”
I’m number 75 on Country Radio nationwide

Susan Can Be Found In: 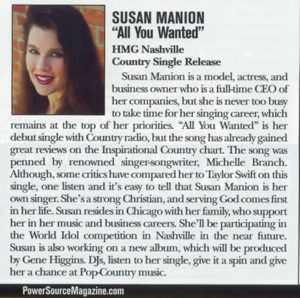 I thank radio, DJs, and the fantastic team at HMG for making my first single “All You Wanted” number 15 for February, 2010 on the Power Source Christian Country nationwide radio chart. I’m being played in all 50 states at 1,000 radio stations. My second single “There is Peace” reached number 20 in August, 2009 on the Power Source Southern Gospel radio charts. My first single is now out at all the country radio stations nationwide.

I would like to thank you, my fans, for hitting my website over 6,000 times and counting. That is impressive thanks to you. On my last trip to Nashville I was promoted on the metro interstate CBS outdoor billboard in the heart of Nashville. I also appeared in the Nashville Music Guide 2010 Fan Fair Souvenir issue for June. I’ve also been published in Power Source magazine most of this year.

I performed at the historic BB King’s during Fan Fair week. I had fans come in from other states to hear me perform. I performed after the legendary T. Graham Brown.

During Fan Fair week I met with Dean Miller, son of Roger Miller (famous for King Of The Road), about producing my music. Dean contacted me after hearing my music at HMG. He has engineered for such stars as Taylor Swift and many others and wrote Terri Clark’s “Little Gasoline” and other hits.

I was recently contacted by one of the most knowledgeable promoters in Nashville. In fact the Tennessee State House of Representatives issued an official proclamation honoring his many contributions to the entertainment industry. Charlie Ray does radio promotion and is highly successful as a radio plugger. He promoted the largest selling album of all time, Michael Jackson’s “Thriller”. He placed “Achy Breaky Heart” with Billy Ray’s manager, Jack McFadden. He can get my songs reviewed by major label stars and their management teams. He only works by referrals.

I thank God for my truly amazing ride.