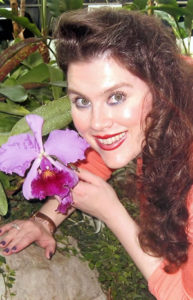 The following article is being reproduced with permission from the Orland Township Messenger.

Susan Manion was a presenter for the Inspirational Country Music Awards in Nashville, TN. Susan is a singer, songwriter and business owner. She was a presenter with the girl from NBC’s The Voice, Holly Tucker. They presented the Blue Grass Award to the Roy’s. The ICM Awards will be on TV worldwide during November, December and January. Some of the stations are CMT, GAC, Direct TV, Channel 363, Total Living Network Channel 545, TCT Channel 377, NRB, and other cable stations. Check your local listings for show times in your area.

Susan is a resident of Orland Park, IL. and owner Susan Marie’s Enterprises, Inc. It is two businesses in one. It is an investing and janitorial cleaning company.

She loves music and has received many awards. Her specialty is Inspirational Country Music, gospel, pop and blues. Susan is finally returning to the studio working with David Huff and Csaba Petocz. She is ranked in the top 20 Southern Gospel and top 15 Christian Country charts nationwide. Go to susanmanion.com to watch all the Inspirational Country Music Award shows, videos and music. Manion said the entire recording process, including writing the songs with other musicians, will take about a year to complete. She will drive bank and forth from Orland Park to Nashville during this time.

She will be appearing on TV once again in the spring of 2014. Some of the stars are the Gaithers, Guy Penrod, The Crabb Family and the Oak Ridge Boys

This article is being reproduced with permission form the Orland Township Messenger.