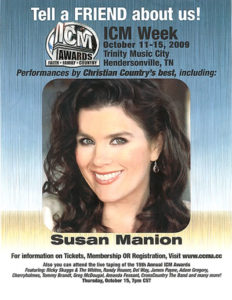 The two songs that I released, “There Is Peace” and “All You Wanted” a remix of Michelle Branch went out to radio to all 50 states where I’m being played on 1,000 radio stations. I cracked the nation wide top 20 Power Source Southern Gospel chart with my single “There Is Peace”. My first single, “All You Wanted” went to Christian Country where it  reached number 15 on the Power Source chart. “All You Wanted” is now being released to all Country radio stations. If it does well there I will be going to Billboard. Only the top make it to Billboard and the top 20 on VH1 and MTV. 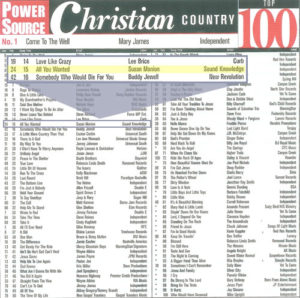 How is The Power Source Top 20 derived each week? The list is derived using a three part criteria:

Each song must be a national release and fit within the confines of the show’s theme of faith, family and country.  Song content must be family friendly.

Songs must be written, preformed and produced on par with the shows high production standards.

Songs must be receiving significant radio airplay in markets outside of the artist’s/record label’s local area.

In addition, each song is reviewed by the Power Source Top 20 advisory board.

Later on this year I will be on World Idol, a spin-off of American Idol. I was picked out of 10,000 performers to be on the show. It will be shown on CMT. Don Leon is the producer of World Idol Inc. He has been in the music, television and movie industry for over a decade. His movie credits include: Roomates, with Peter Falk and D B Sweeney; The Negotiator, with Samuel Jackson and Kevin Spacey; U.S. Marshalls, with Tommy Lee Jones and Wesley Snipes and American Reel, with Mariel Hemmingway and David Carradine. TV credits include thirteen episodes of Early Edition, with Kyle Chandler. 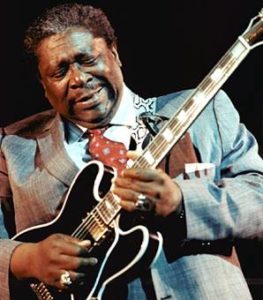 I will be performing again at the historical BB Kings sometime this summer. I will be in a two page spread in Power Source magazine for the months of June and August and one full page ad to be placed in the Nashville Music City Guide this June. All the performers at BB Kings, including myself, will have a custom made CD with their song, name and website included in Power Source magazing which will be given out that night. So come out for a meet and greet.

I will be at CMA music festival – Fan Fair. I will  have a booth again this year at Fan Fair. Last year my booth was right across from Reba McIntire’s. Fan Fair is Country Music’s largest festival. What is Fan Fair? For one week in June, the Country Music industry says “Thank You!” to the fans at Nashvilles’ event of the year. You can meet and greet many of your favorite artists, pick up autographs, take close up photographs and enjoy the many live performances as well as all the other sights and sounds around Nashville. 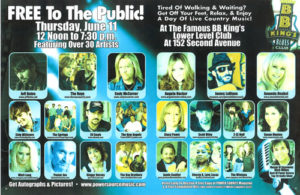 I’ve had offers from labels to make another CD. One is from the son of Roger Miller who is famous for singing “King Of The Road”. Dean Miller, his son, has written for Terri Clark, “Little Gasoline”, and many others. Dean is with some heavy hitters in the music industry. He works with people who have worked with MCA/Universal.

I’ll keep you posted on any new updates.